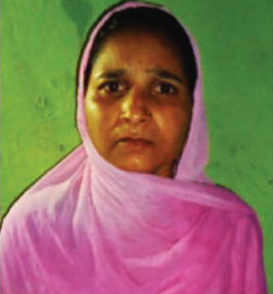 Julekha, wife of Mohammad Matujha hails from a very small village, Sitapur of Bihar. Her husband worked as a daily wager in the village but due to non-availability of enough work to raise the family, her family shifted to Karkar in 2009 in search of a better livelihood. After her husband bagged a job at a factory, the family took a sigh of relief and started their new life in Karkar but the income was not adequate to send her daughters to school. Furthermore, due to the unavailability of formal identification documents, the children could not join any school here.Julekha says, getting her children into a school never occurred to her in the first place. It was the neighbours’ children going to school daily, which prompted her to enquire about the nearby school. On asking the neighbour, she was directed towards the AWC, and that has been the best decision after coming to Karkar, Julekha admitted.

“Academy for Working Children was the best decision for us,” says Julekha

Her two daughters, Rashida and Shazida were the first ones to join the school. In addition, the school helps them with notebooks and other study material, which has further made their life easier. Her daughters attend the school regularly and there has been an appreciable improvement in their academics. Moreover, her daughters participate in Open Sunday Programmes and other activities very enthusiastically. Julekha added that she is eternally thankful to Humana People to People India (HPPI) for supporting her children in education and guiding them towards the right direction in life.