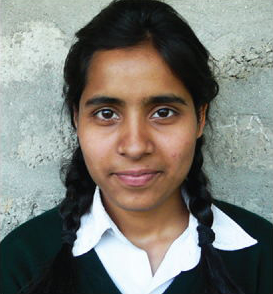 Shiksha hails from Maldevta, a small but beautiful village in the foothills of Himalayas. They are a family with humble means, since her father is a driver and her mother a housewife. She has an elder sister and brother, both of whom are educated.But the best that the family could afford was a Government Hindi Medium School. Like all other similar schools the Prathmik Shiksha Kendra, Maldevta was ill equipped to provide quality education. The girl who looked shy and diffident was difficult to admit into our school. She had few skills of communication in any language and was convinced of her lack of aptitude for mathematics. We found her below average but took her in as a challenge due to her financial status.The early days were tough. She could not even write her name in English but had to learn all her subjects in English. We decided to give her remedial help. She was also counselled periodically so that she did not lose confidence. To her credit, she learnt rapidly and began to handle the languages and all other learning demands like a pro. Soon she was among the top 5 in the Class.

Opportunity knocked on her door when she was selected as an Exchange Scholar to go to China for 6 months.

With help from a volunteer and some recorded lessons she acquired the elements of Mandarin and managed in Beijing for the period. Her school life in China was difficult not merely because of the language but also due to her having started as a vegetarian. The challenge that integration posed helped her accept non-vegetarian food. Her host family was very appreciative and adopted her as their own. The host father felt the need to come and visit her here twice. She endeared herself to them.Paving her path towards successShe has several accomplishments to her credit. Most importantly she is a most graceful dancer performing in the lead role in four successive Annual Sanskrit plays. Good at computers, she has won a gold medal in the International Cyber Olympiad. She covered herself with distinction as the Best Student of The School in 2013 and again in 2014. In 2014, she was elected the Head Girl of the School. Through consistent effort, she qualified for the Gold in The IAYP. A talented speaker, Shiksha won debates and quiz competitions. Proficient in Sanskrit, she won the 2nd position in the Sanskrit singing competition. In 2015, the Institute of Nano Technology selected her for the INST Kalpana Chawla Award.While in her 8th Class in 2011 she became a ‘Sanganeria Scholar’ since the Sanganeria Foundation agreed to sponsor this Class of students. The Foundation’s support was instrumental in the society being able to provide quality education to these students. She was briefed along with her classmates about the expectations of the Foundation and she unfailingly met these. She was proud to be a ‘Sanganeria Scholar’. She worked hard in Class 10 and scored 7.8 CGPA.She had opted for the Commerce stream in 11th Class. She has provisionally been offered a Scholarship that will help her do a 4 year Programme in Interior Design at the Pearl Academy, Delhi.